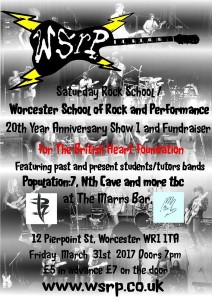 Worcester School of Rock and performance previously known as Saturday Rock School is celebrating 20 years of coaching bands since 1997. It started at the Worcester Tech and was originally run by the brilliant Mick Jones. A list of great tutors has helped coach the bands over the years, including the talents of Ria Keen, Phil Capaldi, Marie Mcnally and Jason Bowld. Jez Cole has worked as a guitar and bass tutor since 1997. Brian Hoggard another regular tutor started to run Saturday rock school for a while after Mick sadly moved on to other things and eventually created WSRP.
It ran for many years until Brian sold the business to Jez and his wife Cymone in 2009. Jez now manages WSRP. It has continued to be successful and great fun for all the students. Many Worcestershire bands attended WSRP and we are proud to be part of their musical journeys.
The event on March 31st will have live performances from ex-students, who professional musicians and current students, who will be showcasing 1 or 2 songs each.
Those performing on the night include Hannah Webb – Population 7, Alfie Newman- Nth Cave and James Mattey, who all attended Junior and Senior WSRP. Students have also become tutors or sound engineers at WSRP. Lee Evans, Hannah Webb, Luke Tasker and Jake Phillips have been or still are involved . So a great bunch of very talented people. There may be some surprises on the night but we shall see what happens. See you all there.