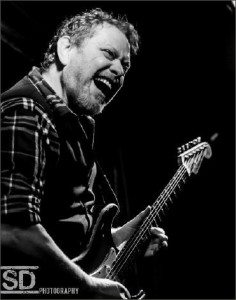 Rory Gallagher, who sadly passed away in 1995, had a huge impact on the world of blues and rock and is recognized as Irelands first real ”rock star” – blazing the trail for many major Irish acts to follow on the international stage.

Apart from his reputation as one of the greatest ever exponents of the electric guitar, Rory left behind an enduring musical legacy which has received fresh recognition and attracted a whole new generation of younger fans over recent years. He was a prolific composer and in his lifetime recorded no fewer than fifteen albums of highly original and soulful blues and rock material.

On the first anniversary of Rory’s sad passing Barry Barnes promoted the first ever tribute concert to his lifelong hero, then in 2000 Barry went on to form ‘Sinnerboy’ with the sole intention of keeping Rory’s memory alive.

‘Sinnerboy’, from North West England, have a huge reputation for faithfully recapturing the sound and excitement of a live “Rory gig”. They have played a major role in promoting the revival of Rory’s music for the last thirteen years and apart from gigging extensively in the UK and Ireland, have headlined Rory Gallagher tribute events in England, Holland, Belgium, Germany, Greece, Spain, Norway and the USA.