Rhombus are regarded as one of the finest Goth Rock bands to emerge from the North of England in many years. Well established on the UK alternative circuit, Rhombus now find themselves in demand across Europe as their exciting brand of Goth Rock draws admirers from as far afield as Germany, Greece, Italy, Spain Australia, Russia, Brazil, Peru and USA. 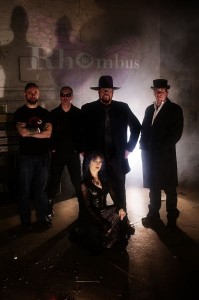 Mixing male and female vocals with swirling guitars, driving bass with powerful drums and electric violin, Rhombus combine some of the best elements of traditional 80s/90 UK Goth, with their own modern, upbeat approach. In addition to their studio indulgences, Rhombus has cultivated an exceptional reputation for their live performance, winning over audiences and powering the party, whether it be an intimate club venue or from a festival stage.

Rhombus play regular live shows across Europe, with plans to go even further afield soon. The band has made multiple visits to Greece, Germany, Austria and Switzerland. Current highlights include a headline appearance at a European festival in Austria and receiving a fantastic reception at Wave Gotik Treffen in Leipzig in front of 1500 people.

In the UK Rhombus have played shows in most major cities at some of the best venues in the country. They are regulars at The Whitby Goth Weekend and have played festivals including DV8 in York, Gotham at the O2 Islington in London and Dark Waters in Nottingham.

The band is no slouch in the studio. Since 2007 the band have released two E.Ps and three full length albums with each CD release having its own style, image and separate identity. The band chooses exciting producers and diverse musicians to help them create something a little special. The band is currently working with the team at The Old Chapel in Leeds, a relationship which promises to deliver great things in the future.

The band are blessed by support from an ever expanding collective of intensely loyal followers, promoters, DJs, writers and photographers, who together with our backroom team and crew, ensure Rhombus always “Make Better Party”