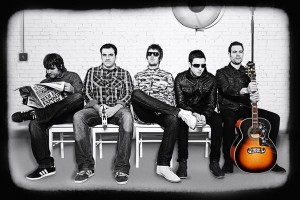 Oas-is are Five Oasis fanatics who live and breathe Manchester’s finest band and are now dedicated to giving you the best look and sound that you should expect from an Oasis tribute band.

Oas-is are made up of experienced musicians who have toured all around the world and who take great pride in reproducing the classic Oasis sound with frightening accuracy and all the attitude you would expect from the real thing.

What’s the story? Some might say Oas-is are definitely, NOT Maybe the best tribute out there.

SIRACUSE are a Psychedelic indie rock outfit with a confident swagger and nod to shoegaze and 90’s guitar bands, loadsa conviction in their playing, distant echoes of The Verve and various early 90’s Northern indie types. Formed officially in 2015 from Bristol / Cheltenham SIRACUSE have released their debut single ‘BECOME LIGHTS’ which is available to digitally download now.

GIGSLUTZ 2016 – ‘Siracuse have the potential to have an ever-changing, unique sound, with a huge fan base as a result – elements of the Manchester bands, with a mix of quirky Stone Roses instruments and tones, among the early Brown and Ryder inspired vocals’