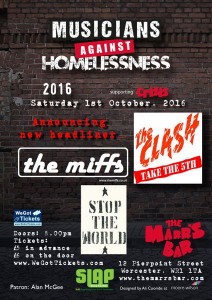 Pete Rochford, Steve Makepeace and Degs Ridge formed the miffs in Worcester early in 2011 and have been playing locally since.  They play a lively mix of punky/ indie/ rock original music and a few alternative and lesser known covers too.  To date they have supported first wave punk band ‘The Vibrators’ and have had their demo track played by Steve Lamacq for 6music.  Also, they have been demo of the week for Rick Witter from shed 7 on his radio show. This year Steve Badsey has joined the lineup and as a 4 piece the sound is even better .  Check them out on www.themiffs.co.uk or www.facebook.com/themiffs or on twitter @themiffs

Take The 5th came together in 2000. They are all experienced musicians and joined up to recapture the spirit of the times they grew up in, when bands like The Clash were beacons for the young generation during a period of prolonged political dis-function and social un-rest in the 1970’s. The Clash had an unsurpassed energy and a blend of Rock and Reggae which spanned and inspired the youth cultures of the day.

Attitudes changed forever:  just because the establishment commands us to live in certain ways, that in itself does not mean we should simply comply without challenging the reasons, questioning the motives or asking “Why?”.  We can do things differently if we want to. We don’t need permission, we can bring it and we can do it – individually or collectively.

In 2010, after hundreds of gigs the band stopped regularly touring but they still come together for special events such as the 10 year anniversary of ‘Arms Aloft in Acton Town’ and the fantastic Joe Strummer Remembrance event in early January at the Komedia, Brighton (now in its 12th year on Saturday 2nd January 2016).

Take The 5th is an appreciation of The Clash. They play as individuals with authentic power and conviction but there is no attempt to impersonate, what would be the point of that? The Clash did it right first time. Having said that their music matters and it is still best heard live: any day, every town.