UK-based, Australian multi-instrumentalist Gwyn Ashton is an eclectic live performer blending hardcore alternative blues with ethnic music, fusing them together with alternate-tuned electric/acoustic instruments such as lap slide, National resonator, 12-string and electric guitars, kick drum and blues harp along with loopers and fuzz boxes to complete his sonic palette. He is a master of the slide guitar and has an armoury of instruments at his fingertips to create a unique, huge-sounding one-man live show, bringing the blues into the 21st Century. 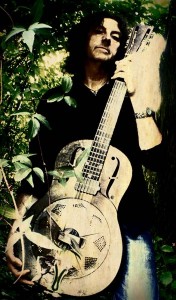