The Cracked Actors
with: Smokefarm 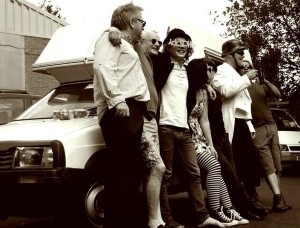 The Cracked Actors formed in 1999 and are veterans of many festivals including glastonbury, endorse it, Kippertronix, Nozstock, bearded theory and the horsedrawn festival. Members are Fudge on lead vocals, Johnny on guitar and vocals, Ash on bass & vocals, Tim on drums, Mal on sax and vocals, Lou on Trombone, Mark on Trumpet, Tatty on percussion and their savior davey g on sound and recording.

They have headlined many gigs and festivals over the years and have also supported many great bands such as the beat, bad manners, the undertones, dreadzone, the toasters, gbh, zion train, neville staples band, robby radiation, the selector, drongos for europe, uk subs and many many more.

The band are currently recording their sixth album.

Smokefarm is made up of brothers Ben and Max. Max is a self taught drummer and helps out with backing vocals, Ben plays guitar and delivers lead vocals. All their songs are their own. Their sound was created in their garage and the brotherly bond they share shows on stage. They draw from a huge range of influences, too many to name, but their sound has been compared to the likes of Nirvana, The Cramps, The White Stripes, Slaves. Their sound has been described as a ‘Hippie House Party’ and this perfectly describes their on stage performance. Peace Love and Poetry.