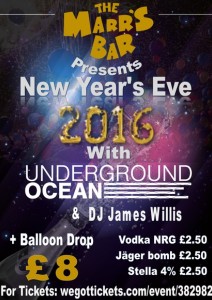 We are having a New Years Eve party at The Marrs Bar with Underground Ocean + DJ Willis + a midnight balloon drop and party poppers for all.

Drink promos all night
Vodka NRG £2.50
Jager Bomb £2.50
Stella 4% £2.50
With a powerful, melodic sound, Underground Ocean is a band whose music grabs your attention from the first bar and keeps it.
With their engaging and intricate approach to rock, Underground Ocean offers a refreshing and exciting experience, that identifies them as innovators in contemporary rock.
Their sound has been described as alternative melodic rock, with huge powerful riffs and drums to tap your feet and nod your head to.
Live the band is known for creating a huge impact and atmosphere from the get go with their driving wall of sound, selling out venues on a regular basis.
Couple that with lyrics that make you think, powerful vocals that distinguish the band’s sound, along with solid, genuine musicianship, Underground Ocean is quickly establishing themselves as the new benchmark in modern rock.
​
The band is from Worcester and formed in early 2014. They are a 4 piece consisting of members Stuart McDonnell, Matt Beddoes, Lee Evans and George Parker. Influences include Foo Fighters, Police, Manic Street Preachers, Billy Talent, Incubus and many more.
​
All members have performed across the UK in different bands; however, Lee has toured extensively around the USA and Europe supporting bands such as L.A. Guns (Both), Ratt, Twisted Sister, Poison, Vince Neil, Bang Tango, Skid Row, Faster Pussycat and Dirty Penny. He performed at the Rocklahoma festival, in Oklahoma, the USA on the main stage in 2007, when he was just 18.
​
Underground Ocean recorded their debut single “Get Me Out”, in October 2014 recorded at Magic Garden studios with Gavin Monaghan. The single was originally released on the 1st December 2014 and then re-released with Pluggin’ Baby (Emma Scott) on 9th June 2015 due to popular demand and achieved lots of radio play nationally and in America. The Debut release was supported with a video, filmed at the Wharf in Stourport-on-Severn.

The band’s 2nd single by, ‘I See through You’ was released on the 7th September 2015 again recorded at Magic Garden and also achieved airtime. The video was produced and edited by independent film company ‘Riser’.

April 9th 2016 marked the release of their Self-titled 5 track E.P. This was supported by a Sell-Out performance at The Marr’s Bar, Worcester and is also being supported by various gigs and UK tour’s at the end of July and October.

They are booked to complete their album with Gavin during the summer which will be supported with a UK and European tour. Release date TBC.
The band has performed at different venues across England, selling out home town gigs from the beginning, first being a 250 capacity venue. They have various festivals lined up and continue to gain new fans along the way.